This weekend brings two popular artifacts from many a childhood back to screens: "Snake Eyes: G.I. Joe Origins" hits theaters, with Henry Golding ("Crazy Rich Asians") as the martial-arts warrior; and "Master of the Universe: Revelation" lands on Netflix, offering director Kevin Smith's updated animated spin on the series, bringing a bit more power and certainly higher stakes for those weaned on the stiff limited animation of the 1980s.
"Snake Eyes" represents the third live-action "G.I. Joe" movie -- eight years after the last entry -- drawing upon a Hasbro toy franchise introduced in the '60s. Yet as much as the movie appears to yearn to jump-start the franchise, it seems to have forgotten to bother with a coherent script, leaving one to wonder how a film with this much action somehow manages to be so boring.
Golding's title character is introduced as a child given a strong motivation for revenge. When we meet him two decades later, he remains on that quest, leading him to Japan and into the world of an ancient clan known as the Arashikage.
For much of the first hour, Snake Eyes seeks to find his place in their hierarchy, which keeps testing his worth even as they face an exterior threat from the Yakuza, a shadowy criminal enterprise.
Yes, there's eventually room for the terror-fighting Joes and their bitter enemy Cobra to squeeze into the narrative, but director Robert Schwentke ("RED") and a trio of screenwriters take the "origins" part so seriously that the story inches along for two hours -- punctuated by martial-arts action and fretting about a magical artifact -- before essentially running out of time. 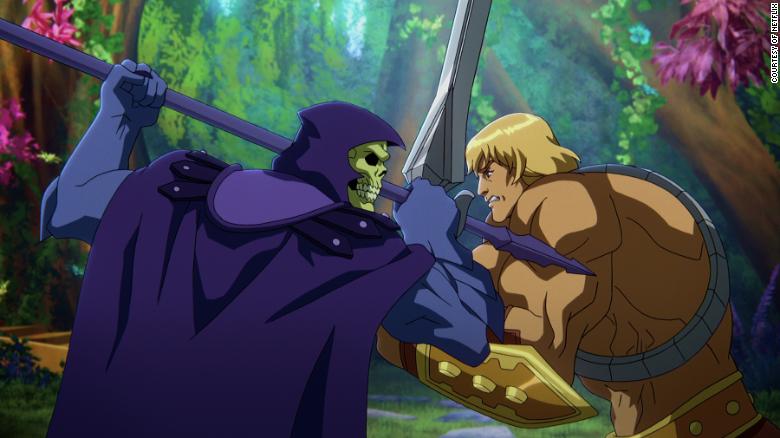 Skeletor (voiced by Mark Hamill) and He-Man (Chris Wood) face off in 'Masters of the Universe: Revelation.'
As for "Masters of the Universe," Smith presents a refreshed take on the original show, augmented by a big-name voice cast, including Mark Hamill as Skeletor, Sarah Michelle Gellar as Teela and a pair of "Game of Thrones" alums, Lena Headey and Liam Cunningham, as Evil-Lyn and Man-At-Arms, respectively.
Basically picking up where earlier versions left off, the tone is edgier and clearly more ambitious, beginning with the fact that there's actual fighting, and the threat to Eternia is of a nature that imperils the universe.
Smith approaches it all seriously -- or at least as earnestly as you can when a guy hoists a sword and shouts "By the power of Grayskull!"
For those expecting something truly boundary-pushing, rest assured, no one will confuse this with "Clerks." Indeed, except perhaps for those heavily steeped in "Masters" lore, the action grinds along telling a serialized story that's billed a "Part I."
Smith explained his fondness for "Masters of the Universe" in a note to critics, writing, "Reverence for the source material was our first priority. We knew we were playing with people's childhoods here, and we didn't want to negate or ruin their happy memories of the classic cartoon they grew up loving."
With due respect to fans, those cartoons weren't very good. Moreover, there was an unsavory aspect to the toy-based TV shows of the 1980s, which the late activist Peggy Charren at the time dubbed "program-length commercials" that were "created to sell things," while she advocated for better programming aimed at kids.
Today, younger audiences have a vast assortment of options, if usually at a price. Yet while the packaging is different, "Snake Eyes" and "Masters of the Universe: Revelation" mostly reveal that the more things change, the more they stay the same.
"Snake Eyes: G.I. Joe Origins" premieres in US theaters on July 23. It's rated PG-13.
"Masters of the Universal: Revelation" premieres on Netflix on July 23.
Tags: Collectibles
Share
Previous articleNext article